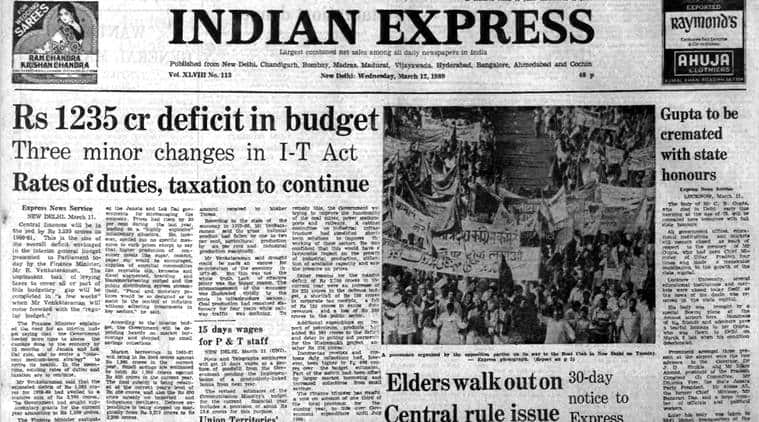 This is the front page of The Indian Express published on March 12, 1980.

Central finances will be in the red by Rs 1,235 crore in 1980-81. This is the size of the overall deficit envisaged in the interim general budget presented to Parliament by the finance minister, R Venkataraman. The unpleasant task of levying taxes to cover all or part of this budgetary gap will be completed in “a few weeks” when Venkataraman will come forward with the “regular budget”. The finance minister explained the need for an interim budget saying that the government needed more time to assess the damage done to the economy by 33 months of Janata and Lok Dal rule, and to evolve a “coherent medium-term strategy” to revive its health.

The opposition members in the Rajya Sabha staged a walkout protesting against the government’s refusal to commit itself to a firm date for seeking the approval of the House on the imposition of President’s rule in nine States. Pranab Mukherjee, who is the leader of the House, said the government would seek the approval of the House for the presidential proclamation under Article 356 at an “appropriate time.” Earlier, members belonging to all the opposition parties had criticised the government for dissolving nine state assemblies despite the concern shown by the House when it passed an amendment to the motion of thanks to the President.

The deadlock on the complex question of identification and deportation of foreign nationals from Assam continued as the Union government and leaders of the All Assam Students Union and the AU-Assam Gana Sangram Parishad failed to reach any understanding. The two sides met twice and the discussions lasted several hours. The home ministry officials and the AASU and AAGSP leaders, however, agreed to meet again on March 12 when fresh efforts will be made to evolve a consensus. Two drafts spelling out the terms of agreement were discussed — one prepared by the leaders of the movement and the other by the officials.

Faf du Plessis to stay on as South Africa captain despite...