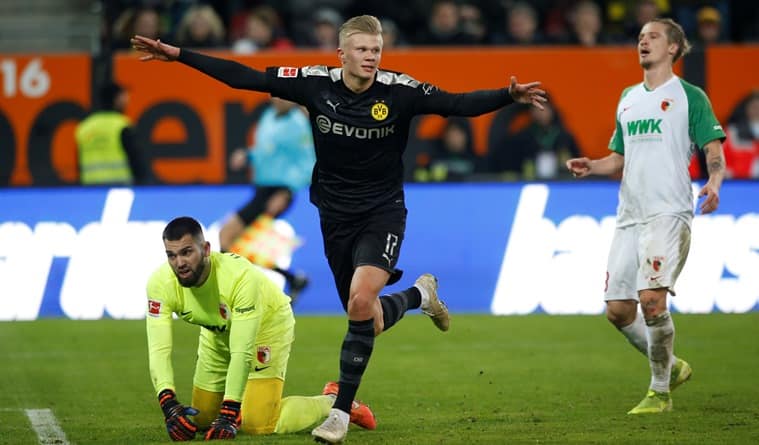 Norwegian teenager Erling Haaland scored a second-half hat trick on a dream Bundesliga debut to help Borussia Dortmund come from two goals down and win 5-3 at Augsburg on Saturday. The 19-year-old Haaland, who came on in the 56th minute after Florian Niederlechner had put the home side 3-1 up, needed just three minutes to grab his first goal, and 23 in all to complete his treble.

Haaland, who joined from Austrian side Red Bull Salzburg during the winter break, became the first player since Pierre-Emerick Aubameyang to score three times on his Bundesliga debut – also in Augsburg for Dortmund.

“If it’s the same success story with the goals, then I’d sign up for that,” said Dortmund captain Marco Reus, who set up the final goal. “He’s making a good impression and had a super first day.”

Former United States international Claudio Reyna’s son Giovanni also made his debut. Reyna came on in the 72nd minute and was booked in the 76th. Aged 17 years, 2 months, 5 days, Reyna became the youngest American to play in the German top tier.

While Haaland grabbed the headlines, Dortmund coach Lucien Favre will be concerned with his side’s tendency to give away goals with careless mistakes – something the Swiss tactician had been hoping to stamp out during the league’s winter break.

“It was a crazy game. We should have been leading long before,” Favre said.

Niederlechner already had a goal ruled out for offside before a mistake from Thorgan Hazard opened the door for the home side’s opening goal in the 34th. Ruben Vargas capitalized on Hazard’s botched back pass and crossed for Niederlechner to score.

The visitors were shocked again right after the break, when Manuel Akanji’s wayward clearance landed for Marco Richter, who gratefully let fly past Roman Burki in the Dortmund goal.

Julian Brandt provided a prompt response in the 49th, but more lax defending allowed Niederlechner to grab his second in the 55th for 3-1.

Haaland wasted little time after coming on a minute later. He shot in off the far post after being set up by fellow youngster Jadon Sancho for his first goal.

Sancho equalized two minutes after that following a fine ball forward from Mats Hummels. VAR came to the visitors’ rescue as Haaland’s second goal was initially ruled offside in the 72nd after Hazard rounded the goalkeeper to give him a tap-in. Reus sent him through to complete his hat trick in the 79th.

Dortmund cut the gap on Leipzig to four points ahead of the league leader’s game at home to Union Berlin later Saturday. Also, Eintracht Frankfurt won at Hoffenheim 2-1 and Cologne enjoyed a 3-1 win over Wolfsburg. Freiburg beat host Mainz 2-1, and Werder Bremen won its relegation six-pointer at Fortuna Dusseldorf 1-0.

Those who can’t show degree are asking for our documents:...