Written by Hina Rohtaki | Chandigarh | Published: May 2, 2020 1:10:17 am UT workers on a CTU bus during the supply of essential goods at Sector 30 in Chandigarh on Friday. (Photo: Jasbir Malhi) A decision to lift the curfew and restrict containment... 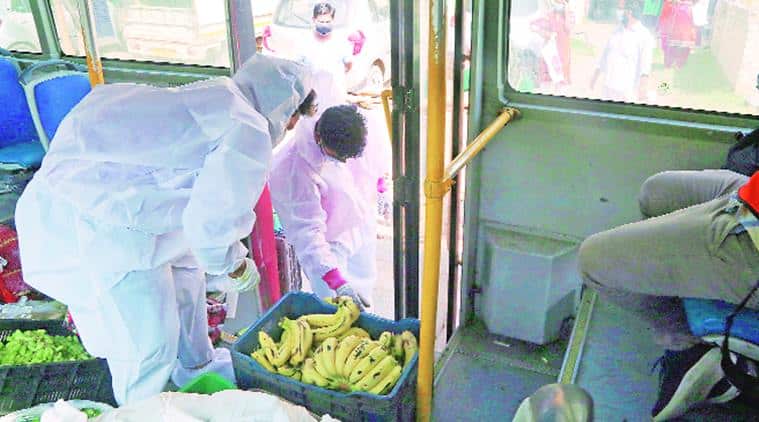 UT workers on a CTU bus during the supply of essential goods at Sector 30 in Chandigarh on Friday. (Photo: Jasbir Malhi)

A decision to lift the curfew and restrict containment zones only to a few pockets is likely to be taken by the Chandigarh administration Saturday. The lockdown will remain in place, as it is across the country.

UT Adviser Manoj Parida said Governor V P Singh Badnore will be taking the final decision on the basis of the committee’s report and new guidelines of the Union Home Ministry received Friday.

Parida said bus delivery may be dispensed if shops are allowed to be opened throughout the day.

Sources in the administration said only affected pockets from where cases are being reported will be sealed and made red zones. “We are mulling not to have a curfew in place but instead a lockdown. Only during curfew are relaxation hours given. So with the lockdown there won’t be any fixed timing. Also, all shops, industries in non-containment areas would be opened but following Centre’s guidelines about the strength of workforce,” a senior officer of the administration said.

The administration said they have received the guidelines of the Centre and exact orders for Chandigarh would be out Sunday.

“There are certain decisions which we will have to take, like morning walks or pet walks etc, but we won’t have all of Chandigarh as a containment zone now, just specific pockets,” the officer added. Chandigarh has been under curfew since March 22. From 10 am to 2 pm, people were allowed to walk to nearby markets. From March 22, the curfew was extended till April 14 and then further till May 3.

The administration said they are yet to work on the modalities of the lockdown. “With lockdown in place, we are yet to work on specifics like odd even scheme and other ways of social distancing in industries or other institutions. That is why we are waiting for the government orders to come,” the officer added.

Meanwhile, at the meeting on Friday, the UT Administrator said guidelines from the MHA are being examined and will be implemented.

Principal Secretary (Health) Arun Gupta denied rumours about sealing of some other areas in Chandigarh. He said only affected pockets have been sealed — part of Bapu Dham Colony, part of Sector 30-B, Kacchi Colony, Dhanas, part of Shastri Nagar, part of Sector 38 and part of Sector 52.

Parida said a list of people stranded in Chandigarh is being prepared. These people can register themselves on the website or can call on the toll-free number. He said, Rajiv Tewari has been appointed as nodal officer for coordination of movement of stranded persons.

Explained: Who is JP Nadda | What lies ahead for new BJP...