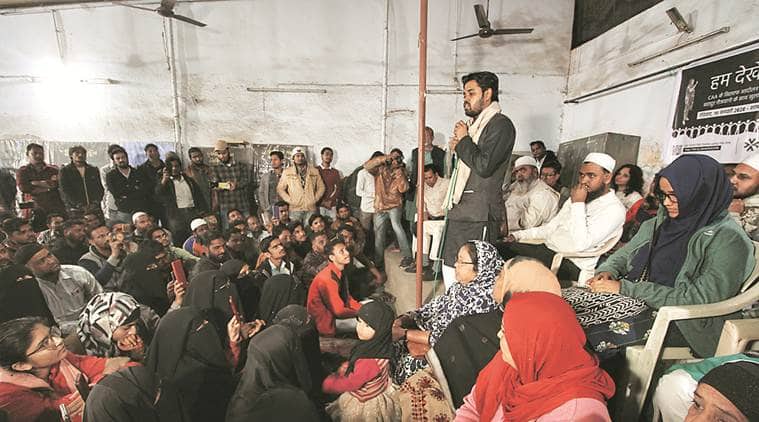 BJP’s statement that Indian Muslims have no danger from the Citizenship Amendment Act (CAA) is like a poll “jumla” (rhetoric) which is very similar to Prime Minister Narendra Modi’s promise made before the general elections that citizens would get Rs 15 lakh in their bank accounts, Jamia Millia Islamia student Asif Iqbal Tanha said here on Sunday.

The interaction with the mediapersons on police clampdown at Delhi’s Jamia Millia Islamia in December last year was organised by Gujarat Alliance Against CAA, NPR & NRC, a group formed by various civil rights activists of Gujarat. Tanha was accompanied by another student of the university, Ayesha Renna, who has become the face of the agitation against the new citizenship law at Jamia after a video showing her stopping police from attacking fellow protesters went viral on the social media last month.

“Has the Central government been able to satisfy the people of the country? Have the people received Rs 15 lakh in their bank accounts? It is a jumla by the government to say that Indian Muslims have no danger from CAA. It is a lie.”

The two students also shared accounts of events that led to the “brutal police action” against the students of Jamia who were protesting against the CAA in December last month on the university campus. Tanha alleged that the police had launched the attack in a manner that seemed like they had entered the campus “not to beat the students, but to kill them”. He also said that the university administration had till date failed to get an FIR registered against the police for the attack. He further said that around 80-90 students have filed separate complaints against the police, but none of them have been registered as FIR. He also said that a petition is pending before the Delhi High Court in this regard.

Lauding people of Gujarat for holding anti-CAA and anti-NRC protests, Renna said that it is like striking at the heart of Modi and Shah.

“Not just in Delhi’s Shaheen Bagh, when we go to other states such as UP and Bihar, we see that our mothers and sisters have come out on the streets, battling extreme cold, to protest against the black Act. This is an organised systematic attack to make us second-class citizens in India. The students of Jamia will continue their protests till this Act is withdrawn,” said Tanha.

Tanha also urged “secular parties who have remained silent on the issue of NPR” to take a firm stand “as NPR is the first step towards NRC”.

After giving an account of what happened on December 15 at Jamia, Renna said, “I am just a representative of the students of Jamia. On that day, there were a lot of students who bravely resisted the police atrocity. I became the face of the protest because my video went viral.”

“There were a lot of atrocities severe than (what was captured on camera) inside the university which no video has captured on that day,” she added.

Renna also cited the example of police action inside Aligarh Muslim University in this regard and said, “It was state sponsored terror inside the universities to suppress the protest against CAA, NRC and NPR. They were afraid because their plans are not going to work with the students.”

Local leaders such as Mujahid Nafees, head of the Minority Coordination Committee, also criticised the CAA and NRC, calling them against the ethos of India’s constitution.

“Since 2014, this government has only found means to harass people, be it demonetization or CAA and NRC. To hide their failures, they are targeting one community. Secularism is the core value of our constitution and for this first time such an act has been introduced which discriminates people on the basis of their religion,” said Nafees.

For all the latest Ahmedabad News, download Indian Express App